Fire up the transmogrifier and we’ll see you out there

I discovered Bill Watterson’s comic strip Calvin and Hobbes in elementary school on a family—a copy of Something Under the Bed is Drooling suddenly appeared on the floor of my family’s minivan. The book’s foreword made a lofty promise only a kid would take at face value: “This is a collection of the sorcerer’s recipes for changing simple ink and paper into the purest gold. This book is magic.”

Like most kids, I was initially drawn to the artwork. Bill Watterson presented a world like nothing I’d ever seen. If having a tiger for a best friend wasn’t enough, there were plenty of dinosaurs and trips to outer space with Spaceman Spiff to keep things interesting. Its existence made me feel like there was an alternative, more exciting world than the more work-a-day one I lived in.

The final strip ran in the mid-90’s but I’ve continued to find new magic whenever I crack open one of my old Calvin and Hobbes books. Now I can see that Watterson deftly lays bare enduring truths in the escapist adventures of a rambunctious six-year old and his stuffed tiger. Calvin and Hobbes remains a solid playbook for pursuing adventure and reminding me that the world can still be a magical place.

Rule 1: Use Your Imagination

Any adventure requires some key elements: a worthy goal and formidable obstacles are a good start. Naturally, overcoming those obstacles should require some combination of determination, ingenuity, and grit. But sometimes it goes overlooked that adventure rarely finds you; it needs to be conceived and pursued. Calvin and Hobbes were constantly creating new adventures with little more than a wagon, freshly fallen snow, a cardboard box, or whatever happened to be lying around the house. 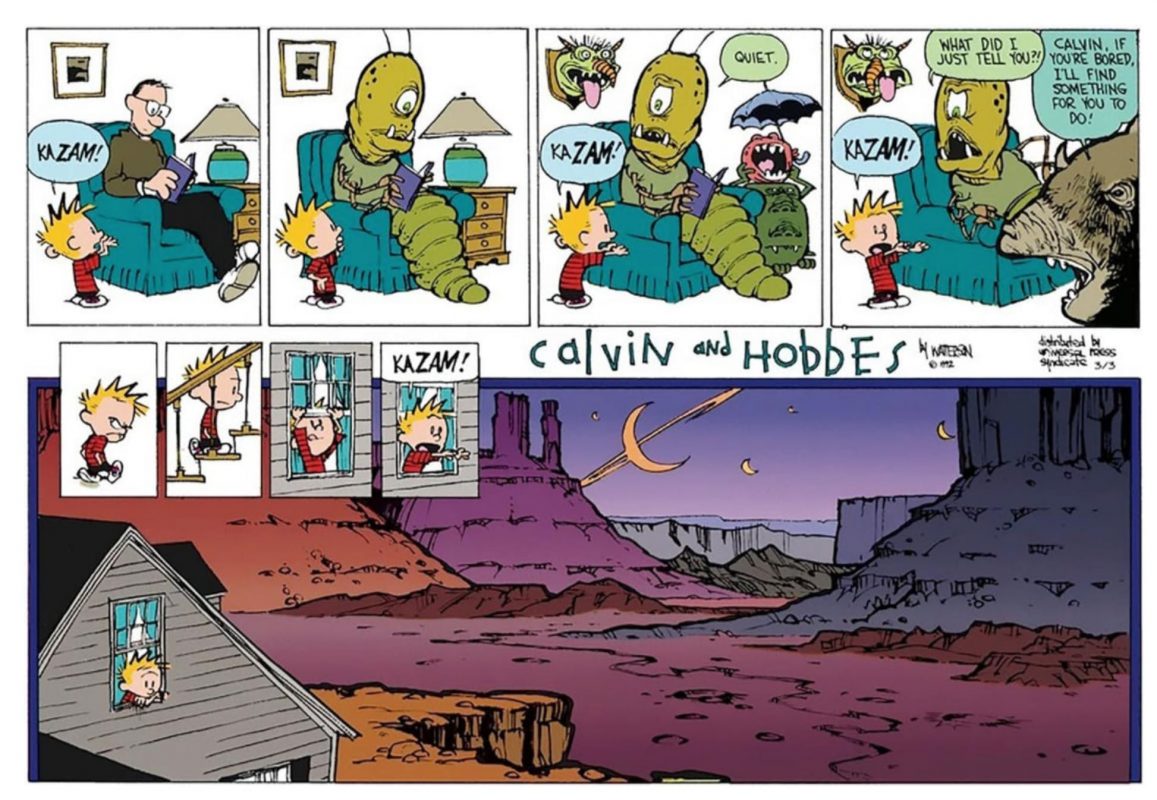 Challenging ourselves to discover something new doesn’t require traveling far, sometimes we just need a new perspective. Most of the excitement in Calvin and Hobbes took place inside his home or in his backyard. Most outings beyond the backyard, like arduous family vacations, were excruciating. A little imagination and a dash of curiosity turned everyday surroundings into something magical. 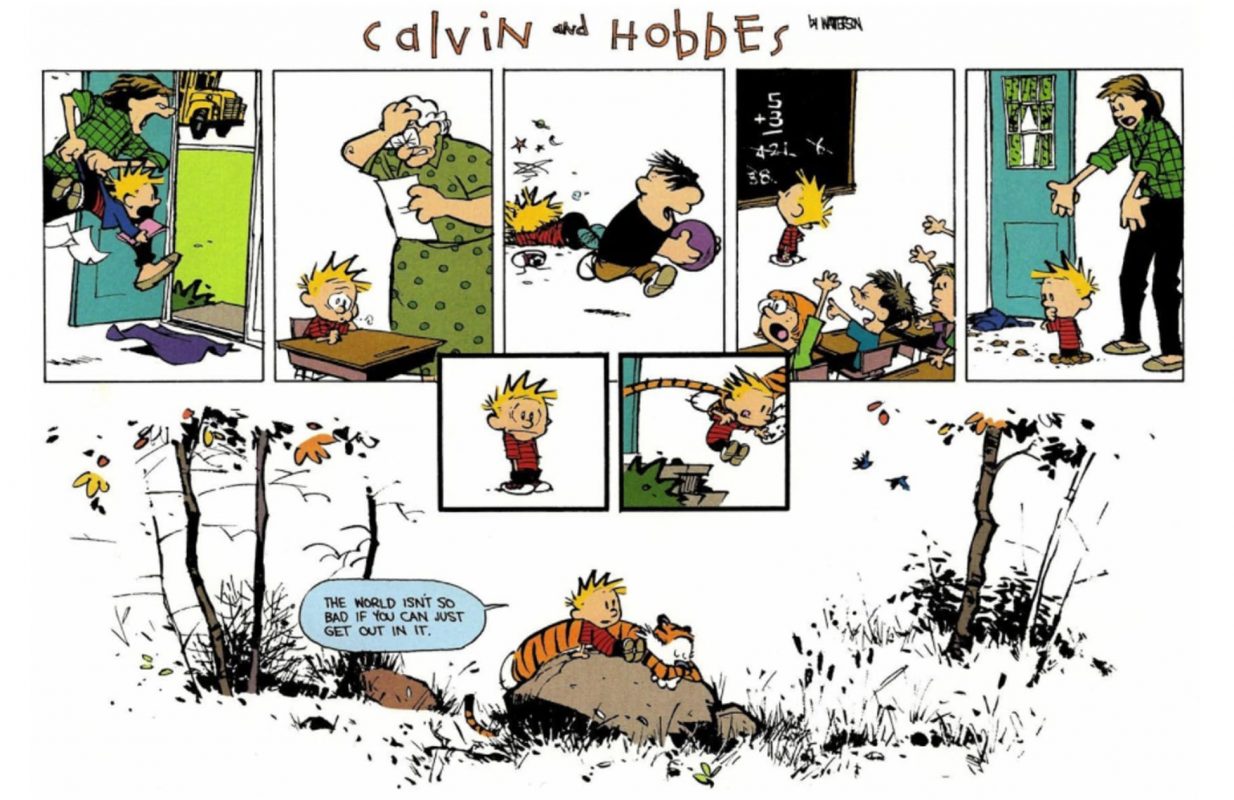 Calvin wasn’t very interested in anyone’s company besides Hobbes. In fact, most of the other characters served as antagonists that he’d rather avoid without a stockpile of water balloons or snowballs. But Hobbes’ company was really all that Calvin needed to create possibilities. In the Hobbes, Calvin found one person to share his unfettered truth and discover the world around them.

Rule 4: Learn From Your Mistakes 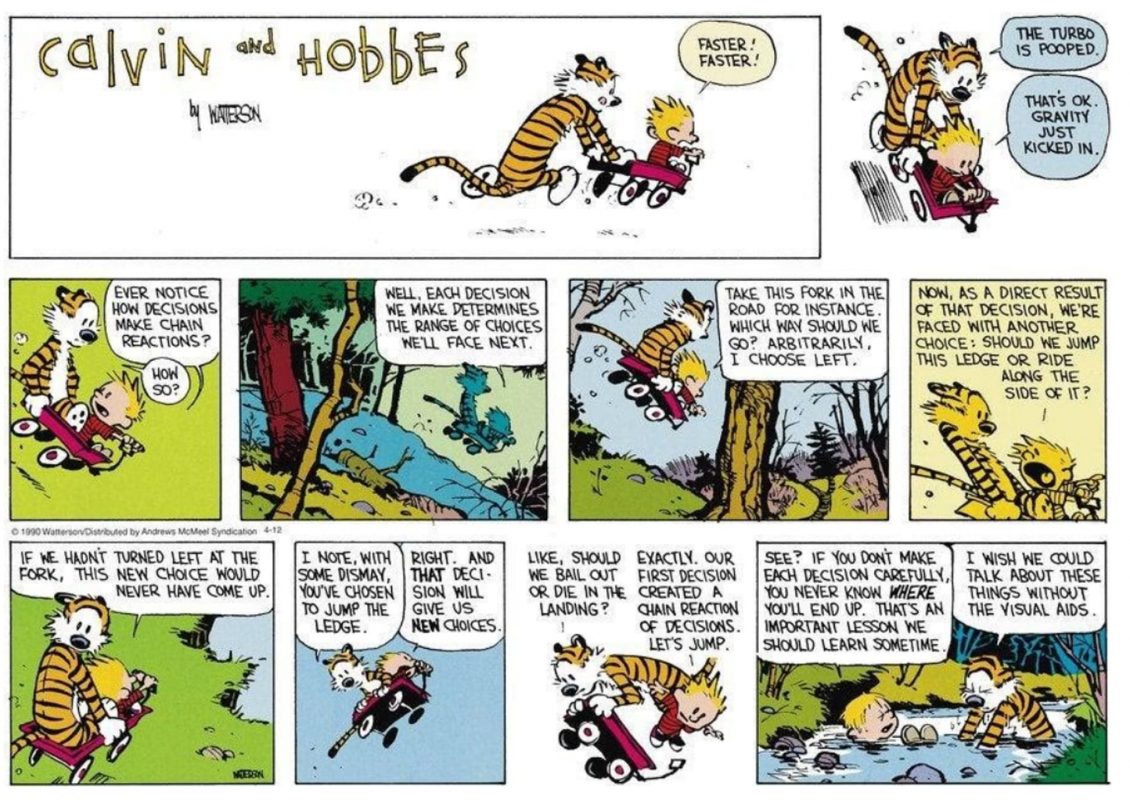 Adventures are meaningful when they serve as recognizable metaphors for the challenges we encounter. They teach us what we’re made of and serve as proof that we’re capable of meeting the challenges presented to us. Watterson incorporated that into the strip brilliantly, with wagon rides frequently illustrating the pitfalls of the failing to recognize the lessons we should have learned.

Calvin and Hobbes took a lot of lumps during the strip’s run from classmates, teachers, parents, babysitters, and each other. For all the bumps, bruises, and losses they endured, Calvin and Hobbes always managed to emerge with their resolve fully intact. I admired their grit when I was reading the strip over breakfast at my family’s kitchen table growing up, and even more so now. Their resilience continues to serve as a compelling reminder that you’re never beat until you quit.

Inspired to bring Calvin and Hobbes back into your life?

Here are a few good places to start:

As with all good pals, it’s best to catch up every day.

Calvin and Hobbes ended 20 years ago. Here’s how it changed everything.

No small praise from Vox—we tend to agree.

Looking for Calvin and Hobbes: The Unconventional Story of Bill Watterson and his Revolutionary Comic Strip

Bill Watterson’s tireless devotion to his vision has as much to teach us as his beloved characters.